High temperatures were cause for concern, according to Greg Matli, Indiana State Statistician for the USDA’s National Agricultural Statistics Service. Hot and dry weather have aided in the maturity of the corn and soybean crops but left some farmers looking for rain to help with soybean harvest and planting of wheat.

Despite shorter days, the combination of high temperatures and lack of rain made for a quick dry down of crops. The statewide average temperature was 65.9 degrees, 4.5 degrees above normal. Statewide average precipitation was 0 inches, below average by 0.74 inches. There were 6.8 days available for fieldwork for the week ending October 1, up 0.9 days from the previous week. 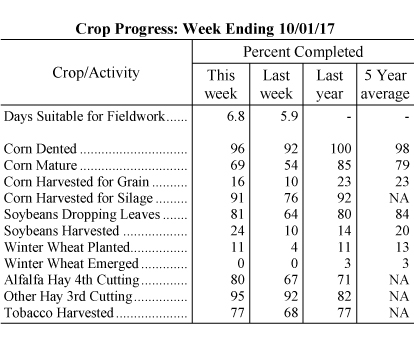 Soybeans have been the main focus of early harvest. Shattering is becoming a problem with decreased moisture levels. There have been reports of combine fires and farmers using different methods to reduce shattering of soybean crops. Effects of southern rust in corn where fungicides weren’t applied became apparent during harvest. Dry weather has taken a toll on pastures. Pasture grounds are reported as dry with the presence of weeds and conditions are deteriorating. Tomato harvest is near completion as well as second crop cucumbers. Major gullies from spring rain are becoming visible with harvest. Other activities for the week included fall tillage, soil sampling, planting cover crops, preparing and repairing harvest equipment, and hauling grain.