The weekend is dry with sunshine dominating statewide on Saturday. Sunday brings more sun in the north, but clouds will be building in southern Indiana as the day progresses. We should see low relative humidity values and good drying.

Rains arrive for Monday, likely before sunrise in southern Indiana. South of I-70 we expect .25”-1” rains with 85% coverage. North of I-70 though, we see mostly clouds and some spits and sprinkles. The map shows a snapshot of action Monday midday. We won’t rule out showers in the north, but anything beyond sprinkles will be isolated and may only have 10-20% coverage. Another colder batch of air moves in behind the Monday system. 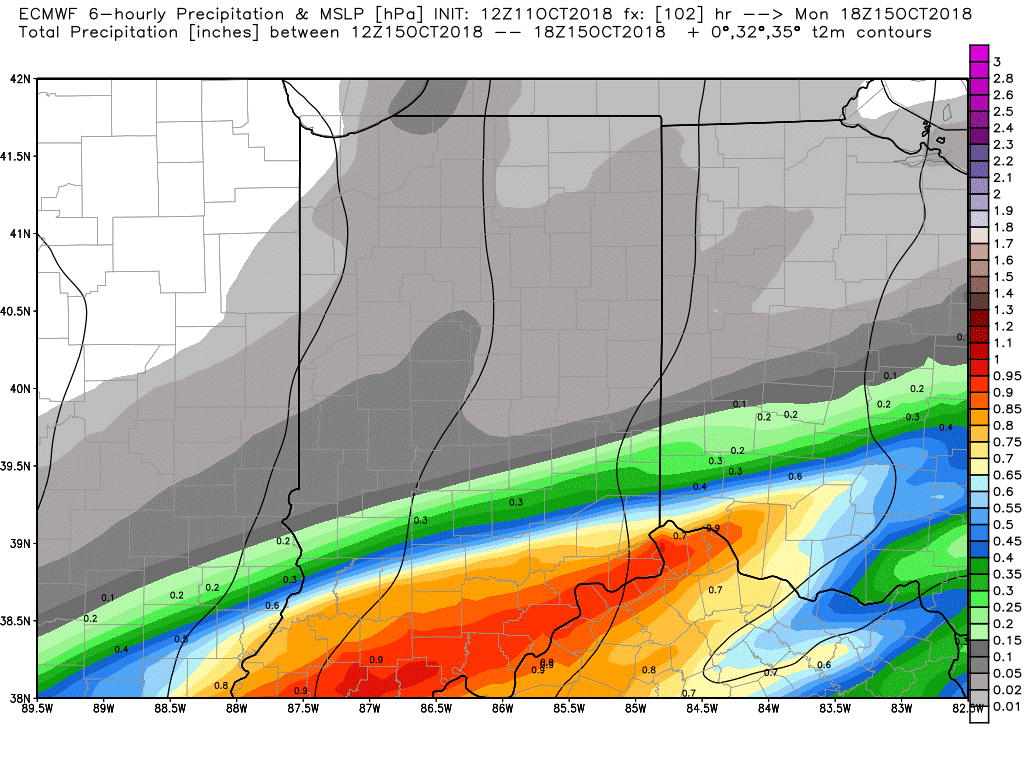 A hard frost is likely in NW and west-central parts of the state Tuesday morning and lighter frost in north central and northeast parts of the state. But, Tuesday brings plenty of sunshine and kicks off a dry period that runs all the way through the following Tuesday. We have to put just a slight asterisk by that statement, though. We see a chance for just a few isolated pop-up showers next Saturday through Sunday morning. This moisture is very hit and miss, and not well organized. We would put coverage at no more than 10-15%, and it really is not worth noting, but just something to keep an eye on. Then, we also can’t rule out a shower or two north and east of a line from Laporte to Decatur Wednesday the 24th. However, the bulk of this 10-day window from this Tuesday to next Thursday will be dry, allowing for good evaporation rates (even in the cool air) and a wide-open harvest window.

A well-organized front moves in for late in the extended forecast period. We look for .25”-.75” over 80% of the state for the 26th into the 27th. This may kick off a slightly more active period to finish the month.