Heavy rains during the latter part of the week slowed harvest progress, according to Greg Matli, Indiana State Statistician for the USDA’s National Agricultural Statistics Service. Low temperatures early in the week brought reports of frost and light snow to some areas, while thunderstorms carried in warmer weather later in the week. There were isolated reports of tornadoes on Sunday; crop damage was still being assessed. The statewide average temperature was 48.3 degrees, 1.2 degrees below normal. Statewide precipitation was 1.21 inches, above average by 0.76 inches. There were 3.3 days available for fieldwork for the week ending November 5, down 0.4 days from the previous week. 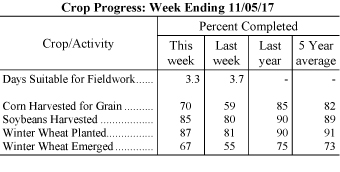 Soybean harvest inched closer to completion early in the week before wet conditions forced farmers to focus on corn harvest. While warmer temperatures brought in with the rain were expected to be beneficial for planted winter wheat, torrential downpours on Sunday were expected to halt field activity for a few days. Livestock were reported in good condition, although the rain caused muddy conditions in feedlots. Other activities for the week included drying and hauling grain to elevators, application of fall fertilizer, and fall tillage.