Indiana, Home of the Cattle Drive 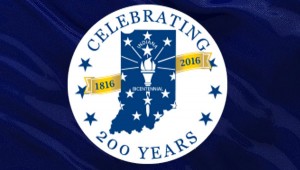 As our state celebrates its bicentennial, there are a lot things about our past we may not know. Hoosier Ag Today begins a series of reports on  our agricultural history, with a look at the Indiana cattle drive.

When you think of big cattle drives, you typically think of western states. But, at one point in time, Central Indiana was home of major cattle drive. “Indianapolis was a gathering point for large numbers of cattle in the early 19th century,” says  Douglas Hurt, of the History Department at Purdue.

According to Hurt, drovers would gather cattle to move to feed lots in central Ohio for fattening, “The route from Indianapolis to Central Ohio was right along a route now covered by Interstate 70. Most people driving down I-70 don’t realize they are traveling one of the great cattle drive trails in American history.”

Today Indiana is not a big cattle state, ranking 23rd nationally in cattle numbers. But long before row crops took over the flatland of NW Indiana, it was cattle country. “If you lived in NW Indiana and looked out your window, you would see thousands of head of cattle,” said Hurt.  Before it was drained in the late 1800’s, the flat lands of NW Indiana were vast grasslands perfect for raising cattle.

In the coming weeks, we will look at other aspects of Indiana’s agricultural history and how it shaped the land, the people, and the economy of our state.