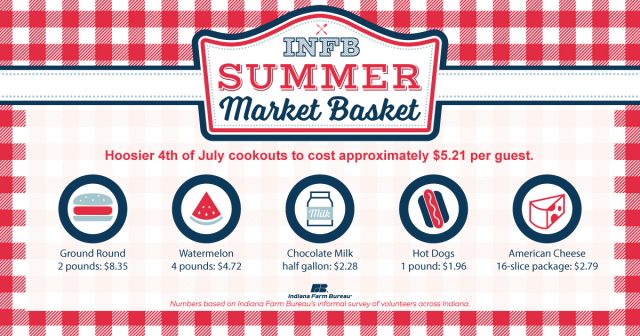 This year, Hoosiers hosting an Independence Day cookout featuring some of America’s favorite summer foods—hot dogs, cheeseburgers, ribs, watermelon and more—can expect to pay a slightly more than $5 per person for the meal, according to an annual survey from Indiana Farm Bureau. That’s five percent less than the national average.

INFB’s informal survey showed that the average cost to feed 10 people at a cookout in Indiana this summer is $52.14 or $5.21 per person. This represents a minimal increase from 2017 and 2016.

The Indiana survey results are included in the nationwide survey coordinated by the American Farm Bureau Federation. The national survey showed the average cost of a summer cookout across the county for 10 people is $55.07, or $5.50 per person, five and a half percent higher than the Indiana average.

“Hoosier families planning to gather together for a meal and celebration this Fourth of July will be pleased to hear that grocery store prices on traditional cookout foods remain affordable, and below the national average,” said Isabella Chism, INFB 2nd vice president and chair of the Women’s Leadership Committee. “A traditional cookout with hamburgers, hotdogs and ribs will only cost shoppers about $5 a person.”
The summer cookout survey was conducted in mid-June by 20 volunteer shoppers all across the state who collected prices on specific food items from one of their local grocery stores. The shopping list included ground beef, hot dogs, hot dog and hamburger buns, pork spare ribs, American cheese slices, baked beans, potato salad, corn chips, prepared lemonade, chocolate milk, ketchup and mustard.

The price of hot dog and hamburger buns and potato salad declined in Indiana this year. The price of ground beef, baked beans, corn chips and mustard remained relatively flat. 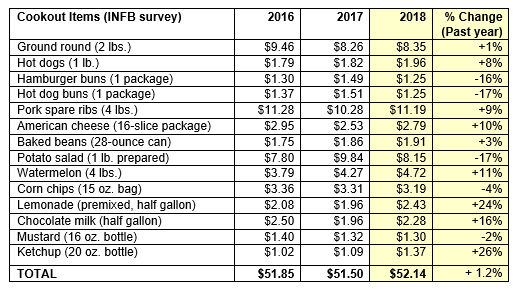 The year-over-year direction of the market basket survey aligns closely with the federal government’s Consumer Price Index report for food at home. As grocery prices have increased gradually over time, the share of the average food dollar that America’s farm families receive has dropped.

According to the United States Department of Agriculture’s revised Food Dollar Series, in the mid-1970s, farmers on average received more than 30 cents on the dollar for consumer retail food purchases. That figure has steadily decreased since then and is now less than 15 cents per dollar. Using this percentage, the farmer’s share of this $52 market basket would be less than $8. The remaining goes to the other parts of the food industry.

“It’s normal for food prices to rise and fall over time, but unfortunately the farmers’ share of the food dollar is at a record low, and after costs of production, farmers only net 7.8 cents per food dollar,” said Chism. “Nevertheless, Indiana’s farmers remain devoted to providing a safe, affordable food supply for their neighbors and people all over the world.”

AFBF has been conducting the informal quarterly market basket survey of retail food price trends since 1989. A total of 96 shoppers in 28 states participated in the latest survey, conducted earlier this month.

Questions to Answer Before USDA can Establish a ‘Carbon Credit Bank’