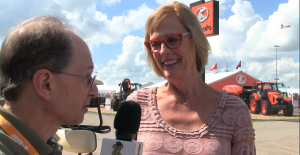 Day one of the 2017 Farm Progress Show drew thousands of farmers to the show site in Decatur, IL. Among the producers who strolled the massive exhibit field under a warm August sun was Indiana’s Lt. Governor and Secretary of Agriculture Suzanne Crouch. After visiting several of the exhibits, she told HAT she was impressed with the technology and encouraged about the future of agriculture, “Farmers in the Midwest are feeding people all over this country and all over the world. So we have to be prepared for the future.”

Crouch also praised the spirit of American agriculture represented by those who are attending the Farm Progress show, “They represent the values that we feel are important. They are risk takers; they are entrepreneurs; they embrace God; they value the land. That is what Indiana is all about.”

Crouch told HAT the technology on display at the show represents the future of agriculture and demonstrates the need for a technology trained work force, “Indiana has been and continues to be a leader in programs that foster a workforce that can advance this kind of technology in food production.”  She added that agriculture is looking to the future, a future where technology and innovation will play a key role.