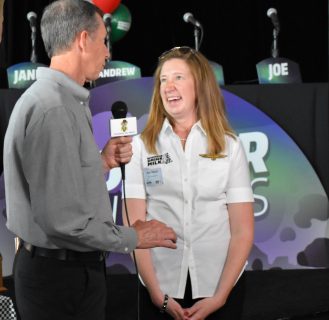 Hoosier dairy farmers Kim Minich of LaPorte and Andrew Kuehnert from Fort Wayne will take center stage with the winning driver and team at the conclusion of the 102nd Indianapolis 500 this Sunday. Minich is the head milk woman this year after serving as the   rookie last year when she learned all about the milk tradition.

“There’s a lot more to it than I thought,” she told HAT during the annual Fastest Rookie Luncheon this week, sponsored by American Dairy Association, Indiana. “There are a lot of people who take it very, very seriously as they should, and it was just a really neat thing to be a part of last year.”

Her goal race day is to just not drop the milk bottle before it’s safely in the hands of the winning driver. Many people reminding her to keep the bottle safe is starting to weigh on her mind. “Just to be a part of that tradition and get the right milk to the right winner and have a lot of fun too.” 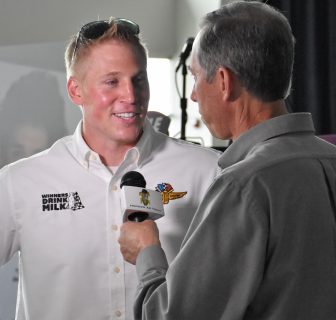 Rookie Kuehnert has a perpetual smile and part of his plan this year is to just have fun.

“It’s a true honor and this is amazing,” he said. “The Indy 500 has always been a huge thing for me to watch and be part of, and to be asked to be part of it this year, the tradition is amazing. So, just have fun and learn be an advocate for dairy. We get out there what dairy is, how much hard work we actually do with the cows, and the quality we put out.”

Back at the Minich dairy it is busy as always.

Andrew is working his family’s 5th generation dairy that has operated the last 125 years.

“We milk right around 320 Holstein dairy cows. We use a combination between four robotic milker units and we still milk some in our old parlor, so we milk around the clock. So, the cows are kind of our ultimate, but we do farm some ground, right around a thousand acres and most of that goes back to the dairy cows. Again it’s a family operation and we work hard every day to put as high a quality milk out as we can.” 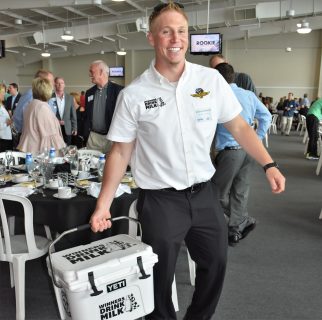 The Indy 500 bottle of milk has been called the coolest prize in sports, and it has been a part of the post-race celebration for 63 consecutive years.

At the rookie driver event a new game show called Jeopardairy was introduced with the rookie drivers and Hoosier dairy farmers competing against each other to test their knowledge of the Indianapolis Motor Speedway, the 500-Mile Race and what happens on the dairy farm.

Louis Meyer, the race’s first three-time winner (1928, ’33, ’36) is recognized as the driver who began the tradition by requesting a cold drink of buttermilk, his favorite beverage, following his victory in 1933. Three years later, Meyer was photographed drinking milk in Victory Lane. Milk was presented off and on during the next several years until, in 1956, the Bottle of Milk was made a permanent part of the post-race celebration by Speedway owner Tony Hulman.

The bottles have become prized possessions of race winners, who also receive a $10,000 cash prize for enjoying that long, refreshing, nutritious post-race drink of milk.