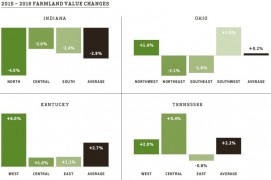 Many areas of the farm sector are depressed right now, notably commodity prices and farmland values, with some states realizing double digit percentage drops in land. But in Indiana and the 4 state area that makes up Farm Credit Mid-America territory there is a different dynamic in play. Farmland values are fairly steady.

Dennis Badger is Farm Credit’s vice president of collateral risk management. He told HAT that values are holding up well in Indiana, Kentucky, Tennessee, and Ohio.

“From January to December of 2015 our data indicates that more or less it was a net zero type of situation across the association. This is actually a bit of a surprise to us given what has been happening in the Corn Belt states in the Midwestern area, but I think a lot of that is due in part to the diversification of land types across the 4 state area.”

Ohio farmland values increased last year by .2% while Kentucky rose 2.7% and Tennessee went up 2.2%. Overall the Hoosier state saw a 2.9% drop in values. 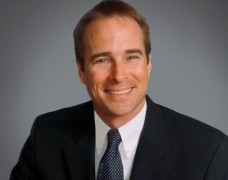 Badger added there does seem to be a correlation between states with the largest jumps in farmland value and current declines.

“Those states that had 20+ and even 30% increases over a 12-month span are now seeing those property values decline by significant amounts,” he said. “Luckily I think even in those areas it has eased a lot less dramatically than their increase periods. We would expect that to probably continue to ease off, though I think in the Midwestern states and the heaviest areas of the Corn Belt further declines are probably to be experienced given expectations and forecasts of commodity prices.”

Factors like weather, overall crop production and even interest rates will also affect land values in the next year or two, but barring any extremes Badger forecasts another 2-3% decline in Indiana and maybe Ohio. Read more of his comments here.