Farmers received a short break from the rain and were able to make significant progress with corn and soybean plantings, according to Greg Matli, Indiana State Statistician for the USDA’s National Agricultural Statistics Service. Warm temperatures and high winds dried out fields, allowing farmers access to plant and replant fields. The break in the weather was short-lived, as the rain returned later in the week leaving fields saturated in some areas. The statewide average temperature was 69.7 degrees, 6.0 degrees above normal. Statewide precipitation was 1.40 inches, above average by 0.49 inches. There were 4.0 days available for fieldwork for the week ending May 21, up 2.2 days from the previous week. 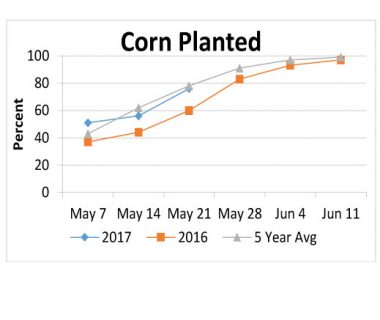 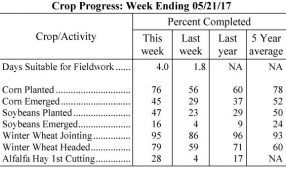 In the past week, soybean planting jumped from 23% planted to 47% planted but is still behind the 50% average.

Farmers rushed to the fields to get corn and soybeans planted, and in many cases, replanted before the rains returned. The high winds that swept across the state did bring some damage to emerged corn fields, although it does not appear to be widespread. Many farmers were not able to spray due to the high winds.

There were some reports of cutworms in corn fields. Conditions were ideal early in the week for cutting, drying and baling hay. Pastures were green and have benefited greatly from the warm weather, but so have the weeds.