Multiple storms brought below average temperatures and more heavy rainfall, halting fieldwork and slowing crop growth, according to Greg Matli, Indiana State Statistician for the USDA’s National Agricultural Statistics Service. Heavy rainfall occurred throughout the state ranging from 1.09 to 5.06 inches, leading to more ponding in fields and leaving some recently planted crops underwater. Some parts of the state also experienced freezing nighttime temperatures, leading to problems with the recently planted corn and soybeans.

The statewide average temperature was 50.1 degrees, 7.0 degrees below normal. Statewide precipitation was 2.98 inches, above average by 2.04 inches. There were 0.7 days available for fieldwork for the week ending May 7, down 3.1 days from the previous week.

Very little planting progress was made this week due to the chilly and wet weather. Much of the corn and soybeans that have emerged are yellow or are underwater from localized flooding, especially in low-lying areas. Farmers are concerned that the cold temperatures along with the wet weather may cause germination failure and have begun purchasing more seed to replant. The cooler temperatures have slowed emergence for both crops. 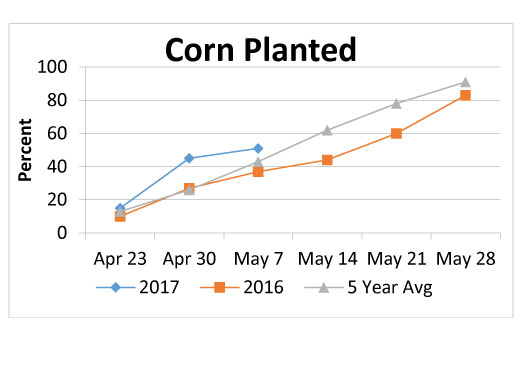 Nationally, 47% of the corn has been planted, compared to 34% last week. Soybean plantings nationally jumped from 10% last week to 14% this week.

Winter wheat has also suffered some from the weather conditions, with some fields reported to be flattened by wind. It is unclear if there is any permanent damage to the wheat fields. Livestock have shown foot soreness in some parts of the state, leaving some concerned about hoof rot and sores. Some pastures and hay fields ponded and experienced little growth during the week.