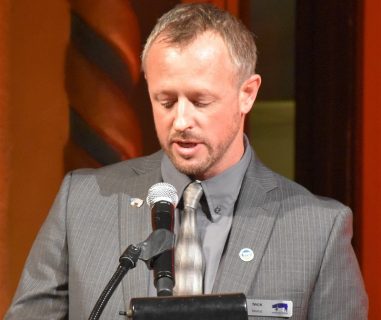 Nick Maple from Amboy, Indiana is the new president of Indiana Pork. He takes over from Union City’s Joe Baldwin. Maple has served on the board of Indiana Pork for the past 6 years. He said he has the good fortune of following many great leaders of this organization and plans to keep the organization focused on its goals.

“Just continue on the tradition of education and teaching people about what we do through the pork industry. Not just on the day to day operations, but really what happens behind the scenes and how hard everybody works to make sure that we produce a good, self-sustaining product.”

Maple spoke with Hoosier Ag Today about some of the issues facing pork producers right now. Trade is an obvious issue that they remain focused on as an organization. Maple also touched on the recent frigid temperatures that Hoosier farmers have had to deal with.

“I was just talking to a representative from Tyson and it was the first time in 38 years that they had shut down a plant due to cold weather. We’ve had trouble with snow and ice getting the animals to the packing plants, but first time for just cold weather.”

Labor continues to be a problem as well.

“Purdue and some of the other colleges around do a great job of getting the programs out there for the education needed to produce the pork, but you really need the people that want to stand behind a power washer or do the little things that are the behind the scenes things that are the dirty jobs.”

Indiana Pork held their annual meeting on Monday, followed by their annual Taste of Elegance event in downtown Indianapolis.