Dry weather continued for most of the week, with rain showers from Hurricane Harvey providing needed relief to Southern Indiana by the holiday weekend, according to Greg Matli, Indiana State Statistician for the USDA’s National Agricultural Statistics Service. Irrigation systems continued to run where available to supplement the limited amount of rainfall received during the week.

The statewide average temperature was 66.6 degrees, 5.0 degrees below normal. Statewide precipitation was 0.94 inches, below average by 0.10 inches. There were 5.9 days available for fieldwork for the week ending September 3, down 0.1 days from the previous week. 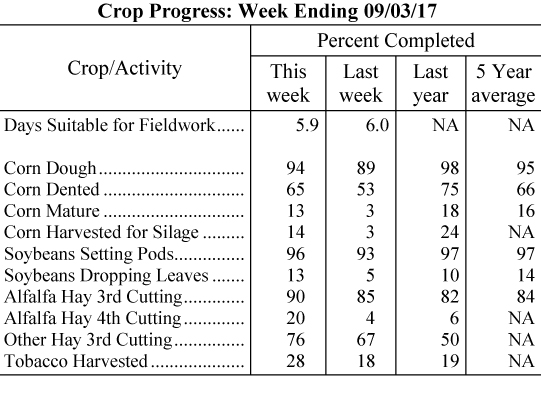 Both corn and soybeans are progressing quickly into maturity due to the abnormally dry weather. Many farmers continued to utilize irrigation systems to maintain adequate moisture for both crops as harvest approaches. Some are concerned that the dry soils have caused corn and soybeans to mature early. Pasture conditions declined some and overall growth has slowed from lack of moisture.

The weather for most of the week was favorable for hay making, although some of the cuttings were of lower quality than earlier in the season. Seed corn harvest began in parts of the State. Mint, potato, and tomato harvest continued. Livestock were reported to be in great condition with the cool temperatures. Farmers also were preparing bins for the upcoming harvest, hauling grain, scouting for pests, and mowing roadsides.