Periods of heavy rainfall throughout the week kept many farmers from replanting their fields, according to Greg Matli, Indiana State Statistician for the USDA’s National Agricultural Statistics Service. Some rain storms were accompanied by strong winds and, in some cases, hail across the State. The weather conditions led to ponding in several fields, leaving emerged crops underwater. The statewide average temperature was 63.4 degrees, 1.1 degrees below normal. Statewide precipitation was 1.41 inches, above average by 0.27 inches. There were 2.0 days available for fieldwork for the week ending May 28, down 2.0 days from the previous week. 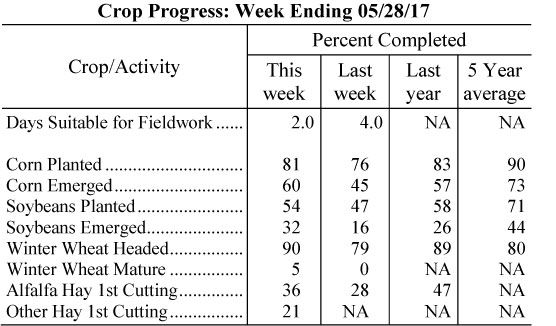 The USDA released its first estimate of crop conditions. As expected, Indiana conditions are not good. According to the weekly crop report, 43% of Indiana corn is rated as good to excellent with 52% fair to poor and 5% very poor.

Pastures and hay fields benefited from the rainfall, but farmers were unable to make much progress on cuttings. Livestock were reported to be in great shape.