Farming, food, and animals have been a part of fairs throughout history. For the Indiana State Fair that is a long history.

“It’s 165 fairs,” says fair Executive Director Cindy Hoye. Now begins another multi-week run of this very popular event for those coming from all around the state.

“We’ve been around since 1852, but as we all know there are a couple of years that didn’t happen because of the war and because of COVID, but it’s just fun to be fully back and being able to put the show back on for everyone.”

Part of the history of the fair is that you’ll usually see changes from the last one you attended. This year is no exception. 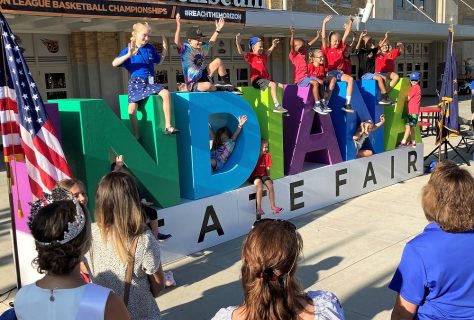 “They’ll see the Indiana Farm Bureau Fall Creek Pavilion under construction and actually this morning steal is going up and they’ve got the crane moving. So instead of shutting down that construction we just kind of cordoned it off from people. But you’ll be able to see that and it’s exciting because that’s the future and the future for agriculture. So, they’ll see that and they’ll see a lot of automobiles on display since the theme is about automobile history in Indiana. I mean people don’t realize how rich our history is with the Duesenberg in the Auburn and on and on and on, so that’s on display in a major exhibit.”

Hoye says the foundation of the fair is agriculture and youth. She adds it always has been and always will be.

“President Lincoln said it the best, that the fairs were about bringing together farmer to farmer to share best practices, new equipment, ideas, and the fairs were the platform where that happened. Well spring ahead to 165 years later and fairs are really important to elevate the farmer to the consumer, and so the farmer now has first connection with the consumer. We do that in the Glass Barn. Corteva does that with the Featured Farmer of the Day and each day there’s a new farmer. They have farmer chats, so we really want to elevate that conversation so that the consumer can understand how their food is raised, how the livestock are taken care of.”

Cindy Hoye has been in the fair business for almost 40 years, and the most popular reason to attend this one has changed during that time.

Fun and crazy, sure, but delicious food too. The Indiana State Fair runs through August 21st and is closed on Mondays and Tuesdays.