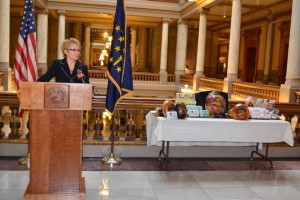 Lieutenant Governor Sue Ellspermann, Secretary of Agriculture, today accepted a donation from representatives of the Indiana State Poultry Association of a record 232,000 pounds – 105 tons – of Indiana poultry products for Hoosier food pantries. The donation took place during a ceremony at the State House. Poultry producers will be delivering products to their local food pantries throughout the state over the next several weeks. Lt. Governor Ellspermann has asked that the products from the ceremony be delivered to Gleaner’s Food Bank in Indianapolis.   “This act of generosity by the Indiana State Poultry Association represents what it means to be a Hoosier,” said Lt. Governor Sue Ellspermann. “I encourage all Hoosiers to follow this example by donating to food banks or other social service agencies within their communities during this Holiday season.”

In addition to the donation, members of the Indiana State Poultry Association presented the Lt. Governor the State turkey, in appreciation of her continued support of Indiana agriculture.

The Indiana State Poultry Association is a member organization that represents over 95% of the poultry producers in the state of Indiana. The poultry industry in Indiana contributes a total of over $2.5 billion dollars annually to Indiana’s economy. Indiana is the number one duck producing state, ranks 3rd in egg production, 6th in turkey production, and raises millions of broiler chickens each year.

EPA Asking Corn, Oil for Input on the Next Phase of U.S. Biofuel Policy