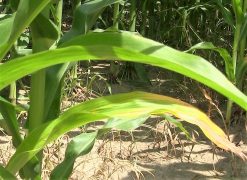 Uneven crops because of the spring and summer elements seems almost an annual ritual now. In Indiana, the evidence of heavy rains throughout the year is there for everyone to see. When you do see a nice crop, there is a good chance investigation further into the field will reveal more of that unevenness. That is what agronomist Matt Hutcheson found in east-central Indiana last week.

“We’re in an area where there was heavy water flowing through the field and some stunted plants due to rain, and even where the plants aren’t stunted one concern is the potential for nitrogen loss,” Hutcheson said. “We can see a few plants here where the leaves are starting to turn yellow and die. You can tell if it’s nitrogen loss which starts with a V at the tip of the leaf and works down toward the plant. So we’ve probably got some denitrification or nitrogen leaching here.”

Hutcheson’s findings are documented in the newest HAT and Seed Consultants video. Just as news of southern rust in southern Indiana was breaking, he found northern corn leaf blight and common rust in this particular corn field. 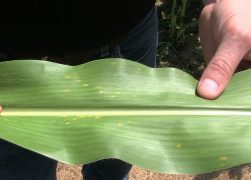 “We’ve seen more common rust this year than we normally do. That’s identifiable by the rust pustules Common rust with have rust pustules on top of the leaf and also under the leaf. Southern rust normally affects the southern growing regions of the country, but this year the weather has allowed that southern rust to move up. A few weeks ago we heard reports of it in Kentucky and now we hear reports of it in southern Indiana. For those growing areas you definitely want to get out and scout your field. Southern rust has the potential to do more damage than common rust.

Hutcheson said make sure you know which hybrids are susceptible to southern rust as you make final decisions about a fungicide application to protect your yield.