In just a matter of days, a sea of blue and gold will flow through the streets of Indianapolis as the National FFA convention returns to the Hoosier State. “It didn’t seem right when they left, and we are so glad they are back” is how Jane Stevens, with the Indiana Soybean Alliance and Indiana Corn, summed up the feelings of the Indiana farm community about the return of the convention to the circle city.  She told HAT these FFA students represent the future of American agriculture, “I look at these young people and know they are the future farmers, the future scientists, the future vets. These are the people who are going to figure out how we are going to feed the rest of the world.” 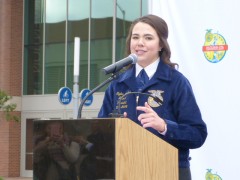 National FFA President Taylor McNeel says FFA is thrilled to be back in the Hoosier State, “We are hoping to have another record-setting year in attendance. Last year we had 65,000, and we hope even more will come this year to Indianapolis.” After being in Louisville last year, the nation’s largest youth convention will be in Indianapolis for the next 9 years.

The theme of this year’s convention is transformation. “Transform is what we hope FFA members will do in their life,” said McNeel. “Also transform agriculture with all the different production methods we have today and will have in the future.” The organization is also transforming as a larger number of its members now come from non-farm backgrounds.

A day  of service will kick off the convention next week as FFA members give thousands of hours of service to organizations in Indiana. On Thursday, several groups began a service project cleaning up planters on Georgia Street, which has been renamed FFA Way during the convention.  At a press conference on George Street, state and city officials officially welcomed the FFA and spoke highly of the contribution the organization makes to the city and the state.

Listen for coverage all next week at hoosieragtoday.com. Coverage is made  possible by Beck’s Hybrids. Beck’s salutes the FFA and its members. 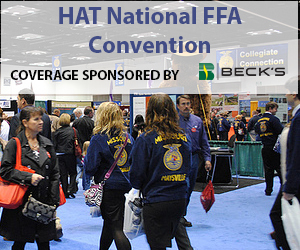