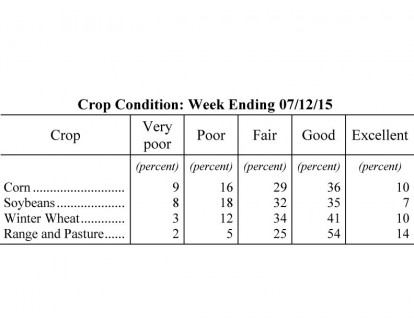 In the week ending Sunday in Indiana, there was a momentary break in rainy weather only for it to return with a fierce vengeance, according the USDA, NASS, Great Lakes Region in it’s weekly crop progress report. Fields that had begun to dry due to the improved weather quickly suffered a relapse of ponding and over saturation. Ponded areas coupled with cooler conditions have expanded the plant mortality area. There were 1.8 days suitable for field work, 0.7 days lower than the previous week.

Winter wheat harvest was delayed for many farmers by frequent rains, keeping the crop moisture high and the fields too damp to support harvest equipment. The excess moisture along with cooler temperatures left some of the matured and harvested wheat sprouting and molding, as well as suffering from aflatoxin and vomitoxin. Delays in winter wheat harvest has put a damper on planting double-cropped soybeans.

Brown stem rot was present in several late planted soybean fields. Many farmers were unable to apply nitrogen and much needed fungicide on corn and soybeans, keeping both crops under 50% good to excellent condition. Similarly, reduced herbicide applications and increased rainfall has made weed control near impossible.

A spike in flies, mosquitoes, and buffalo gnats have caused problems for some livestock. Feedlot conditions have worsened. First and second cuttings of hay continued to be significantly behind last year, although the fields remained lush and healthy. Cucumber and blueberry harvest has begun. Other activities for the week included finishing up certifying acres with FSA, cleaning ditches, mowing roadsides, and installing spray on fields via crop-dusters.

Nationally soybean condition declined by 1 percent, moving from 63 to 62% in the good to excellent category. Corn was unchanged at 69%. Ohio has the worst corn rating at 41% good to excellent, followed by Indiana’s 46%.