Indiana Young Cattleman of the Year Excited for 2019 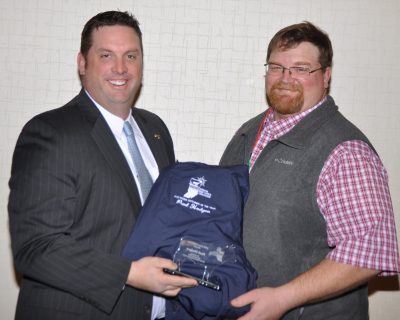 The Indiana Beef Cattle Association honored the state’s top cattlemen during their Annual Convention last Saturday. Dr. Paul Hodgen from Roachdale in Putnam County was named the 2018 Young Cattlemen of the Year. He told HAT that he came back to the farm in 2012 after spending time in corporate America. He has a diversified corn, soybean, and cattle operation. With all of the rolling ground in his area, he wanted to expand the livestock operation.

“That includes utilizing cover crops for grazing. We’re a cow/calf operation mainly. This past year we started bringing in some feeder calves as well. We’ve got a lot of byproduct from our corn side that we need to utilize, and it’s cheap feed.”

Looking back at 2018, Hodgen said things started out great, but took a turn with a cold, wet March that brought a lot of health issues to his calves.

“Surprisingly the calves really rebounded from that, and then we had a pretty decent growing season. Then we got into October and, just like on the crop side, it was a mud bog trying to get the crops out, it was also tough on the cattle. Trying to fight a lot of rain, a lot of mud, and cattle mud do not mix.”

Despite some of those challenges, Hodgen is looking forward to 2019.

“We did some embryo transfer work for the first time in years on our farm and really excited to see these calves hit the ground that we’ve done the ET work on.”

Other winners from the IBCA convention include Phillip and Patty Dow of Paragon who won the prestigious Outstanding Cattleman of the Year Award. The Robert C. Peterson Lifetime Achievement Award was presented to Barry Jordan of Rennselaer and the late Alan Armstrong of Springfield.