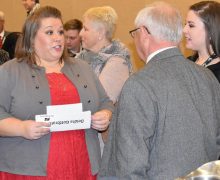 The Indiana contingent of Farm Bureau Young Farmer winners didn’t walk away with the ultimate prize at this week’s American Farm Bureau convention. But they did walk away from the experience with deeper knowledge of agriculture, Farm Bureau and themselves.

“It’s really shown me how agriculture plays into every single aspect of my life,” Gottbrath said of Farm Bureau young farmer competition. “I’m a fulltime critical care nurse in University of Louisville Hospital, and it’s so amazing because you could have asked me ten years if I thought agriculture tied into that and I would have said no. But, every single day I have conversations about agriculture with my patients, with the doctors I work with. If it’s not educating them about some of the misinformation that is out there, it is really showing them. This year I was able to take videos of harvest in and show them what it looks like when it’s in the field. This is what it looks like when we’re harvesting it, and this is what it looks like when the popcorn hits the bag.”

HAT spoke with Gottbrath following her Sweet 16 discussion. Discussion Meet isn’t a debate, but rather a discussion of an agricultural issue or topic. Success means you know the subject well but are also adept at moving the discussion forward and getting everyone involved. It takes a lot of preparation time, and Gottbrath found a time-tested research method that worked for her.

“The biggest way I found to research is to have conversations. I can look in a book and I can look at the internet and read facts and figures and statistics, but the biggest thing that has changed my discussion ability is talking to people, whether it’s honing my skills of talking to people or whether it’s just getting information from them, because our farmers are so full of resourceful information. They’re better than any statistic that’s in a book.”