The new year will start off in the national spotlight for three Indiana competitors heading to the American Farm Bureau annual convention in Nashville this weekend. Deidra Gottbrath from Washington County will compete in the Discussion Meet after winning the 2017 Indiana Farm Bureau Young Farmer Discussion Meet at the state convention. She was Indiana’s winner of the Excellence in Agriculture contest last year.

Also representing Indiana are Jeff Demerly from White County, this year’s Excellence in Agriculture winner, and Matt and Brianna Chapman of Henry County, winners of the Agriculture Achievement award. 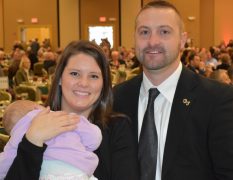 “On our farm we raise corn, beans, wheat, pigs and kids,” Matt said. “My wife has been a partner in the farm and I’ve been a partner in her flower shop business. We’re busy people just like everybody else, but we try to make it all work.”

Brianna says this is not the first attempt to win the award.

“We’ve actually been applying almost seven years for the Achievement Award. We get to see how we’ve grown as a family and as a business. We’ve been runners-up three times, and this was the lucky #4.” Hear more from the Chapmans:Matt-and-Brianna-Chapman

Demerly fell short in his quest to win Excellence in Ag a year ago, but he bounced back this year to make it to Nashville. 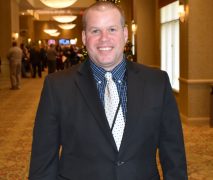 Demerly said he is proud to represent Indiana and has been preparing for AFBF.

“I’m looking forward to it and hopefully have a lot of fun when we go down there.” Hear more from Demerly:Jeff-Demerly

State winners received very nice prize packages and expense paid trips to AFBF in Nashville. HAT will report on their progress in the national competition from the Gaylord Opryland Resort.