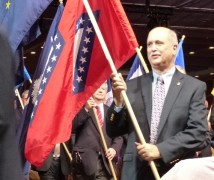 One day after the retirement announcement by American Farm Bureau president Bob Stallman, the retiring Indiana Farm Bureau president has announced his intention to run for the national post. Don Villwock says becoming the AFBF president would fulfill a dream started when he served on the Farm Bureau board as national Young Farmer & Rancher chairman in 1983. He told HAT from the state president’s meeting in Washington DC Wednesday that encouragement from others helped him ultimately decide to run.

“There are a lot of great, fellow presidents here at the meeting and I’ve been thinking about that. I had been asked a little earlier in the year to start thinking about that. There has been a lot of encouragement from some great leaders all across the country which is critical to getting elected, and so with their encouragement and the support of my family we decided to throw our hat in the ring.”

Villwock said experience is part of what he has to offer the nation’s largest farm organization.

“Agriculture is very diverse across this country. There are very few farming and ranching operations I’ve not visited in my tenure in Farm Bureau, and I have great respect for the leadership across this country and the passion American farmers and ranchers have. I think my job would be to communicate and be their spokesperson and maybe even rise to the bully pulpit a little bit stronger to make sure the public and the congress and the administration know how important agriculture is to this great country.”

He said the road ahead will be difficult as candidates campaign for the support of state presidents and the 400 delegates to the January convention. A number of those state leaders have also expressed an interest in the job.

In paying tribute to the retiring Stallman, Villwock said he has been a great leader to emulate. Hear more on that and the issues Farm Bureau must continue to address, in the HAT interview with Don Villwock: Don Villwock on Run for AFBF President