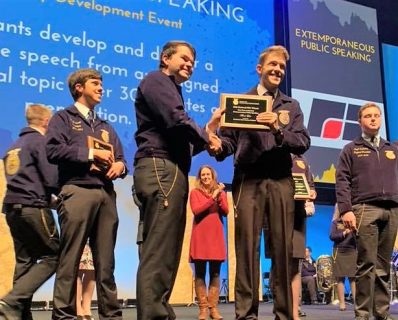 A Purdue freshman food science major has taken first place in the national competition for Extemporaneous Public Speaking. Micah Lehe of White County and the Tri-County FFA Chapter won the Leadership Development Event in which members have thirty minutes to prepare a four to six-minute speech on an agricultural topic after which they answer questions. It’s a skill Lehe didn’t immediately know he possessed.

“I remember the first time my advisor back in freshman year suggested I do it,” he said. “I thought he was a little crazy, but after a few practices I realized I’m kind of good at this, and so even though I didn’t really make it out of districts the first year, I thought I’m going to keep at this. I really love doing it and thought one day I could go really far. It’s a pretty remarkable achievement and I’m really just thankful to the Lord and to everyone that helped to make it possible.”

Lehe said preparing “for something that involves no preparation” comes down to practice and giving lots of speeches.

“I had to push myself a lot. I think I gave upwards of 70 speeches this year and hundreds over the last 4 years, and every time my advisors weren’t very forgiving. They would give me something challenging on purpose, and I remember Mr. Martin with Indiana FFA saying we’re hard on you now so that the competition seems easier. I really think that philosophy of training really helped out.”

He told HAT this particular competition is very helpful for his Purdue career and whatever comes next.

“Having that ability to speak so clearly, keep up with the issues in such a fast-paced environment is really going to be helpful in any career. I do like my major right now but I’m not sure where my career is going to take me, but I do know that having the skill set is going to help no matter where I go.”

In fact, Lehe said one of the national event coordinators told FFA students during orientation that the Extemporaneous Public Speaking event offers some of the very best real-world applications.