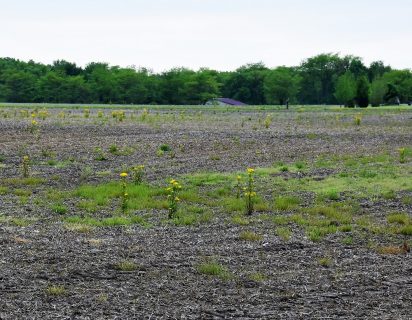 More rain over much of Indiana this week means more muddy fields and more planting delays. But those untouched weeds in so many fields are a significant issue staring at farmers, according to north central Indiana Pioneer Field Agronomist Brian Early.

“Fortunately Purdue tracks some insects like black cutworms and the counts have been reasonably high on that and they’re kind of sporadic. Black cutworms like to lay eggs on those weedy fields, so when we get enough GDU’s they’ll go and cut the plants if you were fortunate enough to get planted. Probably the biggest one is armyworms,” he added. “The armyworm counts in the traps have been really high, and once cover crop fields are burned down, or these weedy fields are burned down, if there’s some corn or up or wheat especially, the armyworms will migrate out of those fields and go looking for corn or wheat.”

Early says watch those fields and be ready to treat them with an insecticide. He says more problems could arise as the need to plant right into a green cover crop increases with all the delays.

“Some guys like doing that and a lot of guys would prefer not to,” he said. “We definitely have seen an uptick in guys doing that and that will continue as the rain continues, so to me that’s the biggest risk to armyworm damage, when you plant into a green crop like that. You kill that cover off and then the armyworms are setting there waiting for the corn to come up, or your neighboring field gets hit as they migrate out.”

That June first date is getting closer, a time when much of the state will want to look at switching to earlier maturity corn, but Early adds that he’s getting more questions now about switching soybean maturities.

“Guys have planted beans early and we’ve seen good luck moving maturity groups up, and that data is pretty similar to corn. It would suggest you probably could stick to your original plan on soybeans until the middle of June. Interesting data I was looking at from Purdue on dates to maturity, the later you plant beans, you can plant about any group soybean and they all kind of mature at the same time.”

So, there isn’t a compelling reason to switch to later beans, a change from the advice they once would have given farmers.