The tradition of race drivers and dairy farmers at the Indianapolis 500 continues Memorial Day weekend at the 102nd race. In addition to the longstanding bottle of milk being awarded to the winning driver, American Dairy Association Indiana, Inc honored the rookie drivers at their 44th Fastest Rookie luncheon Tuesday. 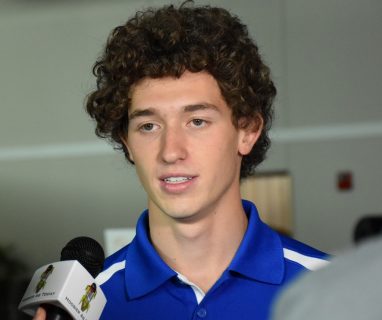 “We know we have a fast car, so as soon as I manage to keep myself out of trouble we’ll be ok for the end of the race,” he said about race strategy. “So, let’s see if we can drink the milk at the end of the day.”

He said it is a dream to participate in the milk tradition with Indiana Dairy at Indy.

“To be there with these guys is awesome, so let’s see if I can drink my milk on Sunday.”

Race fans are familiar with Leist’s team owner AJ Foyt and teammate Tony Kanaan, and he told HAT he’s benefiting from all that experience and wisdom.

“They are legends here and have been supporting me so far a lot, and everything I need I just ask them, so that’s pretty cool.”

Leist won the Indy Lights Freedom 100 at Indianapolis Motor Speedway last year, and Californian Kyle Kaiser was that series’ champion. He is a rookie ready for the big race and its milk tradition.

“I’ve dreamt of that! And I’ve seen the pictures, I’ve seen the videos of all the winners doing it. It’d be a dream come true,” Kaiser said. 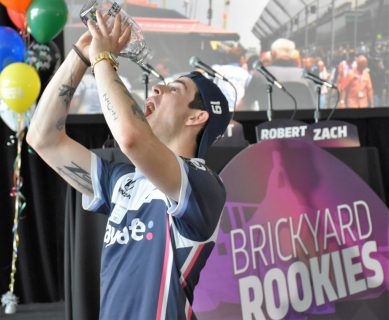 Zachary Claman DeMelo qualified 13th for the Indy 500. He said taking the bottle of milk and celebrating with his team is “something I would love to do, and I’m getting ready to milk the cow actually. I’m still psyching myself out for it.”

Yes, there might have been some nerves in advance of the milking session, but those were settled when the drivers ran out of time and their media tour duties called.

Veteran driver Robert Wickens is an Indy rookie and teammate of popular driver James Hinchcliffe. Both are Canadians, and both have had a difficult month of May at the track. Wickens crashed early in Monday’s practice and will only have an hour of practice Friday to get the repaired car ready for race day. A win would certainly salvage Wicken’s month and that of Schmidt Peterson Motorsports.

“The dream is to get my first IndyCar win. At the Speedway for the Indy 500 would be a dream come true.”

Each year the fastest rookie is presented with a $5000 cash award and the driver’s name is placed on the permanent Fastest Rookie trophy that resides in the Indianapolis Motor Speedway Museum.