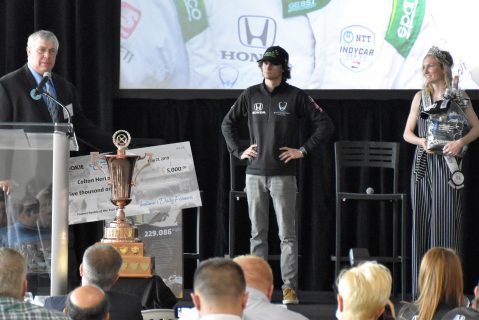 If ever a rookie driver in the Indianapolis 500 was destined to be part of the 33-car field, Colton Herta can make that claim. He won two races at the Speedway last May in the Indy Lights series, and his father Bryan has raced in the 500 and owned two race winning cars, driven by Dan Wheldon in 2011 and most recently Alexander Rossi in 2016.

So, the younger Herta knows the track and the traditions of the race, including the milk tradition.

“I wanted to go with traditional buttermilk, but I went against it just for the fact that after a long hot day of driving for 3 ½ hours, who wants to sit down and enjoy a glass of buttermilk? I went with whole milk,” he told HAT. “I usually drink fat free or 1 percent when I’m at home. I drink quite a lot of milk.” 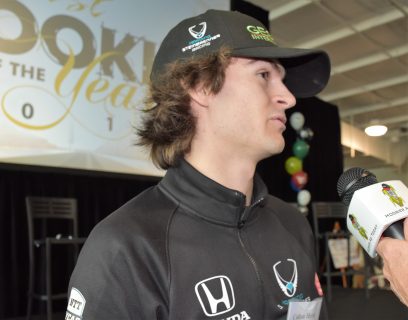 Herta was honored by American Dairy Association, Indiana Tuesday as the fastest rookie for this Sunday’s race. The milk tradition started in 1933 by race winner Louis Meyer, “the first man to start the milk tradition, and he opted for a glass of buttermilk. I don’t know why. I don’t know if it was a thing back then and why anyone would enjoy drinking buttermilk, but he did it and that’s how it started.”

So, Herta knows his 500 history. Indiana dairy farmers are a part of that history, sponsoring the victory circle milk tradition for decades and the Fastest Rookie Luncheon for 45 years. Nineteen-year-old Herta starts in the middle of row 2, fifth fastest of all the drivers. It’s a great position on the starting grid as he realizes his life’s dream.

“Yeah, very tense and very excited. For all my life I’ve been looking up to these guys who have been able to race in it, and to finally get the chance to is quite spectacular.”

Herta, already the youngest driver to ever win an IndyCar race, grabbing first in the IndyCar Classic in Austin, Texas back in March, the second race of the season, can be the youngest to ever win the Indy 500. But if he’s the one in victory circle, you know it won’t be buttermilk. 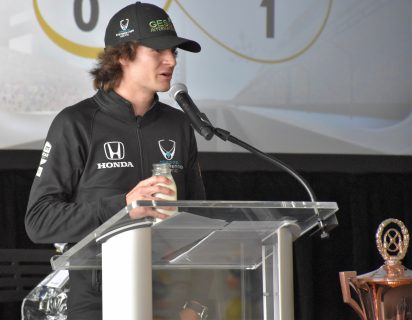 Herta received a $5,000 Fastest Rookie prize from ADA Indiana and made a nice salute to the state’s dairy farm community upon receiving the award.