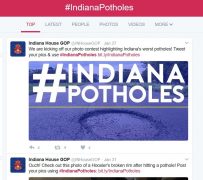 The past week in the Indiana House of Representatives it was all quiet on the road funding front. But work continues behind the scenes with ongoing talks by Senate and House members and constituents about possible amendments to bills put forth. Justin Schneider at Indiana Farm Bureau was happy to tell a Friday conference call that one possible funding mechanism for roads appears to be going away.

“A couple of weeks ago, we reported that there was a bill that got through the Senate, that got through committee and had property tax levying authority as a financing mechanism for road funding. I think we’re going to see that be changed,” Schneider explained. “We’ve worked on that and there’s no official word. I’ve not seen any amendments, but I think that’s the direction that is going to go, which is positive news for us. We’ll support a lot of things for road funding for our policy, but property tax is not one of them.”

“Whoever sends in the best photo, that photo is going to be blown up and recognized on the day they pass 1002. So, we would love for our members to engage on that and we really need some pictures of rural roads. Holes anywhere, blacktop, gravel roads, whatever it is. Chairman (Tim) Brown even in response to a tweet I put out the other day had responded back that they would love to have some pictures of holes in gravel roads. I know you all know where those are. Video footage also works well,” Schneider added. “I’ve seen some of that where people had their phones or dashcams going while they were driving down the road and you could just watch their vehicles bounce from hitting all the uneven pavement and potholes.”

HB 1002 is the transportation infrastructure funding bill authored by Rep. Edmond Soliday where funding is through a fuel tax rate increase.