Is It Too Early to Start Talking About the Farm Bill? 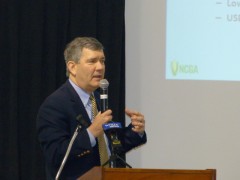 Both at an Indiana corn and soybean growers Forum and at an Indiana Farm Bureau listening session last week, the topic of discussion was the next Farm Bill. Sam Willett with the NCGA says it is not too soon. He notes the current bill was written during a time of profit, but this next bill will be written during a time of falling farm income. “Most projections are for low prices to continue for several years so we will be writing a Farm Bill in a much different environment,” he said. “This will make people consider what kind of policy recommendations we are going to make to Congress.”

The cornerstone of the safety net programs is crop insurance. Willett feels there will be good support for crop insurance in the next Farm Bill because the program has proven it works. He told HAT that, despite floods, droughts, and low income, there have been no calls for disaster payments “like we had before Congress made improvements to the crop insurance program.” He added this public-private partnership has worked well and has been efficient in its operation.

The issue that almost derailed the last Farm Bill was the SNAP food assistance program. This time around, Willett says the ag committees are working hard to make sure there is enough support on both sides of the aisle for SNAP, “There have been several hearings, and the ag committees are collecting a good deal of information about how the programs are working.” He acknowledged there are still those who oppose the program but, with widespread support, it can be part of the Farm Bill this next time around.

Willett called for unity in agriculture and for farm groups to form coalitions with other groups to gain support for a new Farm Bill. He pointed out that money is tight in Washington and that means agriculture must have strong support to keep our programs funded.

Watch the complete interview with Sam Willett in our Better Farming report which will be on-line this week.