Research and technology related to vertical farming is growing. Food being grown in warehouses is how many believe the industry has to move forward to feed a growing population. Darrel Kesler is the Dean of Technology at Ivy Tech in Fort Wayne. He said there was a vertical farming industry that started long ago in Chicago that failed.

“Their number one reason they failed was a lack of talent. So, we took the initiative of actually developing a curriculum, a program, where we can train students to go into this industry and allow this industry then to develop in Indiana.” 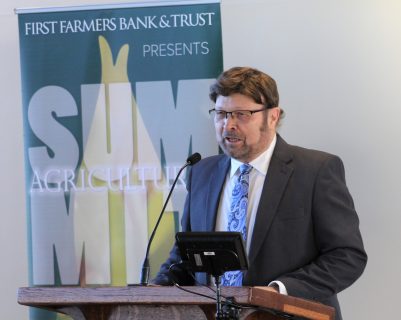 Kesler told the crowd at the First Farmers Bank and Trust Ag Summit last week how vertical farming works and the advantages.

“We can stack in very low trays, and go straight up in the air, and produce a huge quantity of vegetables in a very short time, producing anywhere from 200 to 500 times more produce per land mass by doing vertical farming.”

He was also sure to mention that this is not additional competition, at least not for Hoosier farmers, as it’s not corn and soybeans growing in these warehouses. Kesler says we should really see this as an opportunity for agriculture growth in Indiana.

“The industry in Indiana does not raise the vegetables that typically are raised in a vertical farming or controlled agriculture environment. Therefore, as far as adding to agriculture, it is a complete solid addition. It’s not taking away anything except in the southwest part of United States.”

He says those farmers in the Southwest United States will not like this industry at all because it will disrupt what they’ve been doing for years. He says vegetables with higher nutrient quality and better taste will come from these vertical farms.

“That long transport time deteriorates the quality of the produce, and they also select hybrids, or variants, that actually can survive long travel. They’re not the best tasting produce.”