The Ivy Tech Ag program in Columbus has unveiled what they are calling Ivy MAC, a new mobile ag classroom, that can travel the state to teach and train about agriculture. Ivy Tech professor David Harrell spearheaded the effort. He said this all started back in 2016 when Dr. Sue Ellspermann became president of Ivy Tech.

“She wanted new and innovative ideas from everyone across our entire system and I had this idea. I’d seen other states do a mobile ag classroom, but they were primarily centered on elementary school students. We saw a need that there was a gap in what high schools could teach.” 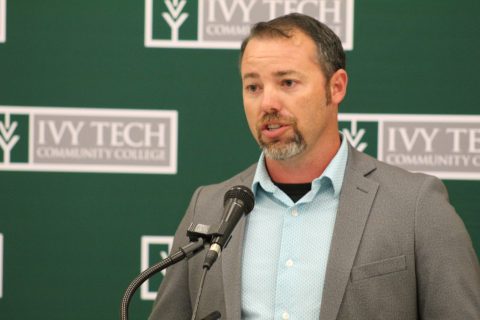 With Ivy MAC, they’ll now be able to take ag education to high schools where it’s not been offered. Harrell also says they’ll be able to provide on-site job training for ag employers that can include OSHA compliance training.

“What our ag employers are telling us is we need more hands-on skills. So, in here, we’ve got soldering, we’ve got electrical wiring, we can do grain grading…that came from one of our advisors who said this is a need in our industry, for people that can grade grain at the elevators. We can do soil sampling. So, more than just go out and pull the plugs. We have the SOILSCAN 360 so we can do the nitrate testing instantaneously.”

In addition to all of that, it will be at a number of events, including the National FFA Convention Oct. 30- Nov. 2 in downtown Indianapolis, helping spread the word about the Ivy Tech ag program.

“Ivy Tech Ag has only been around for about 11 years across our state. So, it’s still a fairly new program. Our campus, in particular, we encounter people on a daily basis who still don’t know that we have ag. So, a beautiful rolling billboard like this going down the road, being seen at farm shows, being seen at schools, really spells out what we can do for agriculture and that Ivy Tech is an option for ag in our state.”

The original budget for Ivy MAC was $170,000. That money came from numerous local ag businesses and individual donors. Harrell was grateful for all of the donors telling me that’s what he loves about the ag industry in Indiana. When you ask, people say yes because they want to help their neighbor.