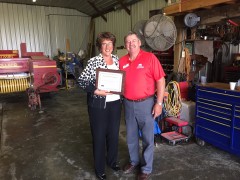 Indiana Farm Bureau has presented Rep. Jackie Walorski with a “Friend of Farm Bureau” award. Walorski represents Indiana’s 2nd Congressional District, which encompasses all or portions of LaPorte, St. Joseph, Elkhart, Starke, Marshall, Kosciusko, Pulaski, Fulton, Miami and Wabash counties. She serves on the Committee on Agriculture, and is also a member of the House Rural Education Caucus and the Congressional Rural Veterans Caucus.

Friend of Farm Bureau recipients are first nominated by their state Farm Bureau organization, and are then approved by the American Farm Bureau Federation’s board of directors.

During the presentation, INFB District 1 Director Harold Parker noted that Walorski has a 95 percent voting record on American Farm Bureau priorities in the 114th Congress. Among those priority issues, Walorski has been supportive of biotechnology, more specifically the GMO labeling bill. She also stood up for Hoosier farmers by opposing the death tax, as well as EPA’s ill-conceived Waters of the U.S. rule.