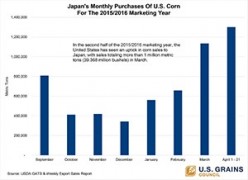 Despite these strong sales, Japan has fallen behind its traditional spot as the largest purchaser of U.S. corn, currently coming in second to Mexico. This is due in part to U.S. corn exports being hindered globally by a strong U.S. dollar and larger than expected global corn supplies.

However, the tides have turned now with international buyers, including those in Japan, taking advantage of low prices, a stronger yen and ongoing market development work done by the Council to reengage Japanese buyers as long-term purchasers of U.S. corn and promote U.S. suppliers as reliable, long-term providers of corn. The Council has done this through one-on-one consultations with local buyers and end-users of corn in Japan, hosting the annual Japanese Corn Outlook Conference, bringing trade teams to the United States and escorting producer missions to Japan.