Jay County’s Dillon Muhlenkamp is the new Indiana FFA President for 2019-2020. After being named a candidate and going through a rigorous 7 rounds of interviews, I asked Muhlenkamp if he thought being named president was even possible for him.

“I don’t really know, I mean, it’s been something that I’ve always shot for but I didn’t really know it could happen until it just did.”

He says his number one goal this year in office is to stand united with agriculture.

As for what the next year holds for him, he’s pretty excited.

“We’ll be working down at the state fair. Please come visit us! We’ll go on industry tours, visit with business leaders, host camps down at our leadership center in Trafalgar, Indiana, as well as visit local chapters throughout the entire state.” 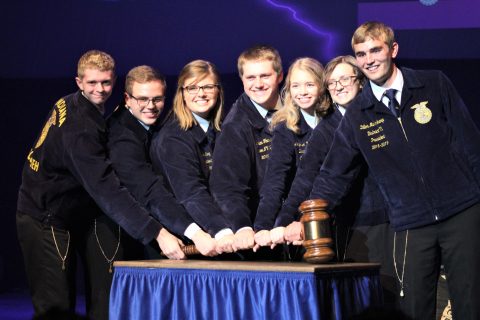 In addition to Muhlenkamp, the following officers were also announced.