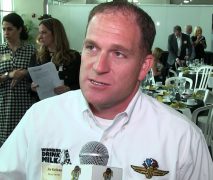 Wet weather is part of the Indy 500 race day forecast Sunday, but it’s only the winners milk that race fans want raining down at the Indianapolis Motor Speedway. There to deliver the bottle will be head milk man Joe Kelsay from Kelsay Farms in Whiteland. He tells HAT Indiana’s dairy industry values their connection with the world’s greatest race.

“I think when you can connect Winners Drink Milk with a public that really cares about where their food comes from, how it’s produced, and how it’s made, and introduce Indiana’s farmers, some of the hardest working and most dedicated folks to their animals, the planet, their environment, their families, their communities, the race really is a great way to make those introductions, start those conversations, and really celebrate winners drinking milk. This is certainly one of the most fun and exciting places to be the entire month of May, here in Indianapolis at the motor speedway and at the end of the race. Oh my, this is such a cool thing to be a part of, and really an honor to be able to represent Indiana dairy farmers.” 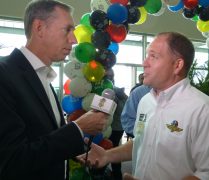 “At the end of the race we were watching the app,” he explained. “You couldn’t see the jumbotrons and you couldn’t hear the commentary over the loudspeaker. We’re watching the app, and the lead changes at the end of last year’s race. It’s so exciting but each driver has their own change, whether it’s whole, 2% or skim milk, so Janet and I were struggling to get back there and make sure we had the right one. When the rookie rolls in what a cool way to finish, rolling in on 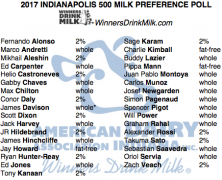 fumes. What a strategy move by Andretti.”

Dairy farmer Kim Minich from LaPorte will join Kelsay. She is the rookie who will present milk to the winning car owner and chief mechanic. The milk tradition began in 1933 when eventual three-time Indy 500 winner Louis Meyer requested a bottle of cold buttermilk after the race. This year over half of the drivers selected whole milk.