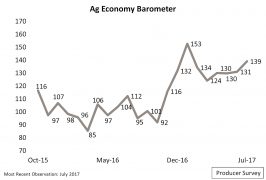 Tuesday’s sharp selloff in the grain and oilseed markets coincided with the release of the Purdue University/CME Group Ag Economy Barometer. Unlike the markets the barometer is up, and it moved up to 139 for July, the highest since January. The monthly barometer measures farmer sentiment about the agricultural economy, and Purdue’s David Widmar says the rise comes largely on expectations of a rally in prices in the future.

“What we’ve really seen is an increase in producers’ expectations of what they think commodities are going to do in the next few months as well as the next year. They’re more optimistic in both cases,” he told HAT. “It’s really important to note that producers were thinking that a year from now commodity prices would be stronger. Corn, wheat and soybeans, they all thought there would be higher prices for July 2018. So, just because we’ve had some ups and downs in June and July, in the third week of July producers were more optimistic about a year out from now. I think it’s a little more of a long-term shift in producer optimism about commodity prices.”

An example of producer price optimism is the survey question about whether December corn futures would go above 4.25 between now and this fall.

“Forty-five percent of producers thought that was possible, and that’s the highest share that we’ve seen compared to previous times we asked that back in January and April. It’s also the fewest producers, about 32 percent thought that futures contract would fall below $3.50 a bushel, and a very similar story for soybeans. So, more thinking that there’s a rally coming between now and the fall and fewer thinking that there could be a drop in the futures price between now and the fall.”

The July index is the second-highest since the barometer began in October of 2015. It is based on a survey of 400 U.S. agricultural producers. July exceeded recent barometer readings by 8 to 9 points, breaking out from a range of 130 to 131 during the months of April, May and June.

The July Ag Economy Barometer report is at https://purdue.edu/agbarometer.