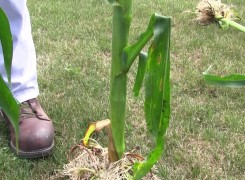 Indiana is sporting some very good corn and soybean crops this year and one of the best locations according to one agronomist, was at a stop HAT made near Peru in Miami County and the north-central part of the state. The farmer there said yields could be double what they were a year ago. Bill Mullen with Seed Consultants says it truly is a night and day difference.

“The corn and soybeans here have the makings for a very good, high yielding crop,” he said. “I traveled all the way from eastern Indiana and by far the nicest looking crops are stopping here at this farm.”

Mullen explained some of the troubles those in eastern Indiana have encountered this year.

“When we planted we started planting early, and we probably planted in soils that were crusting and we had a little bit of compaction. Then we had cold, wet conditions and the crop struggled to come on through with stress right from the get-go. We’re seeing some issues of some nitrogen deficiency. We’re seeing fields there that are rolling up when they’re under stress really bad. You don’t see that up here.”

He said the Miami County farmers had a good spring and weren’t forced to rush to plant. They’re also seeing good results from slow-release nitrogen strategies this year.

“It’s spoon feeding the plant throughout the summertime all the way until August. So he’s trying to build fertility wise for the nitrogen that the plant needs all season long. He doesn’t cut short on any phosphorous or any potash. He has a good fertility program and it really shows. You don’t see any nutrient deficiencies on any of the corn or soybean plants.”

Take a look at the corn root systems and the progress of the Liberty Link soybeans in the latest video with Bill Mullen, Director of Agronomic Services at Seed Consultants.