By: Bruce Kettler, Director of the Indiana State Department of Agriculture 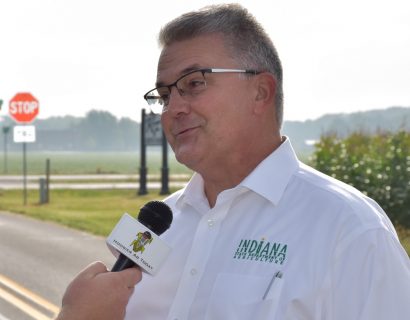 March brings all my favorite things, spring weather, farmers gearing up for planting season, the days become longer, and the temperature become warmer, college basketball is upon us and least we cannot forget it is National Agriculture Month.

I think most people know that agriculture is not only all around us but also is truly the only thing that can sustain us. Almost everything we use, eat or touch would not be if it were not for agriculture. I want consumers to be informed and tuned-in to our food supply system and agricultural practices to ensure they are making informed decisions for their families at the grocery store.

This year’s theme for National Agriculture Month and National Agriculture Day (March 23) is Food brings everyone to the table, a theme that I want to further discuss. I want people to better understand where their food came from and how it got to their plates. I want people to learn from farmers about their food and how it was humanely and efficiently grown or raised. Lastly, I want consumers to embrace the new agricultural technology we have available that is driving our industry forward.

The same goes for our elected officials, as it is important for them to better understand agriculture and the source of their food, since they make policy choices that affect producers each day.

The science says and continues to say that foods made from genetically modified crops are safe for consumption, they can reduce water usage, help make plants less susceptible to disease, and some have been developed to be more nutritious for impoverished countries.

Animal gene editing has also come a long way through decades of research.  Land grant universities and research institutions have worked tirelessly for years on animal genes and have seen many breakthroughs that can enhance the quality of livestock. Scientists have developed a chicken that is resistant to contracting and transmitting avian influenza. Similarly, gene editing, for example, could develop pigs with resistance to African swine fever. Gene editing research shows it is possible for one of the deadliest pig diseases to be eradicated, Porcine Reproductive and Respiratory Syndrome, or PRRS, which costs the U.S. over $600 million each year.

For animal gene editing to advance it will take more collaboration between USDA and U.S. Food and Drug Administration (FDA) for a smooth approval process. The current regulatory process is tangled and filled with red tape around each corner. It took more than 20 years for Indiana’s own AquAvantage salmon to make it through the tangled regulatory process at the FDA. And – to date – it’s the only FDA-approved biotech food animal ever. Meanwhile, there are dozens of other beneficial animal biotechnologies in development and waiting for approval.

We can all agree that 20 years is too long when the science is clear and concise. As researchers and dollars leave the U.S. for other countries, instead of leading, the U.S. agriculture industry is yielding this technology to others.

Education is the first step, not only for consumers but especially for the lawmakers in Washington, D.C.

We are fortunate to live in a great country where we have the privilege to make many choices. We, as consumers, have the option to choose how we feed our family, whether that be solely organic foods or fast foods. We have the option to stand up for gene editing technology and their safety. We have the ability to eat processed food for each meal if we would like. Most importantly, in my opinion, we have the option to learn more about our food and our food systems from Hoosier farmers who are more than willing to share their story.

This March, while celebrating Food Brings Everyone to the Table and National Agriculture Month, I encourage consumers to learn more about their food products, ask farmers how things are produced and what goes into them to keep food on your family’s table.