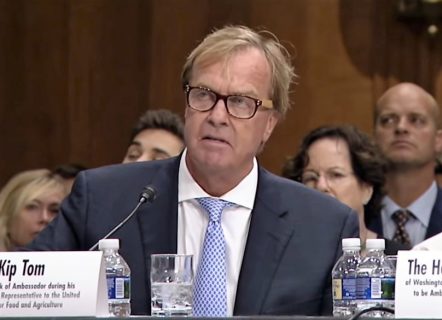 The pathway to ambassadorship for an Indiana farmer moved another step forward this week. In a quick and unanimous vote, the Senate Foreign Relations Committee has advanced the nomination of Kip Tom to the full Senate. Tom has been pegged by President Trump to be Ambassador and U.S. Representative to the United Nations Agencies for Food and Agriculture, based in Rome.

“My goal in serving as Ambassador will be to improve our missions’ outcomes to serve the interests of the American people,” Tom said last month during his nomination hearing. “If you confirm me, I will bring all my knowledge, work ethic and skills to bear to ensure that this becomes a reality. I will do it in ways that I hope brings honor to our country, our values, and our national interests.”

Tom has spent a lifetime on the farm, but has also travelled extensively, giving him a window into the world’s needs and challenges.

“I’ve been privileged to visit humanitarian response efforts in Afghanistan, Iraq, Kenya, Tanzania, where food security continues to be a challenge, in some cases in the midst of protracted conflict. Most of these people are farmers and I witnessed the challenges they face in growing enough food to feed their own children and family. As a farmer and as a father, to see these people struggle in this way is heartbreaking. While the world will always see crisis, I know we can do better to lift people out of poverty.”

Tom added, “I cannot imagine a better honor than to serve in a leadership capacity and be a small part in advancing U.S. global food security efforts to create a more stable, food-secure world.”

Kip Tom is from Leesburg, Indiana in Kosciusko County and both Indiana Senators Todd Young and Joe Donnelly have supported the Tom nomination.

“Kip Tom is uniquely qualified to serve in this position that is so important to international food security, and I am pleased that the Senate Foreign Relations Committee agreed and supported his nomination unanimously,” Senator Young said. “I look forward to doing all I can to ensure the full Senate confirms him without delay.”

Hoosiers’ Democrat Senator has been supportive throughout the process as well.

“I am pleased the Foreign Relations Committee unanimously supported Kip Tom’s nomination, and I look forward to the full Senate vote,” Senator Donnelly. “Kip exemplifies the best of Hoosier values and I expect he will do an outstanding job as the first Hoosier representing the United States at the UN.”