Be aggresive on rallies 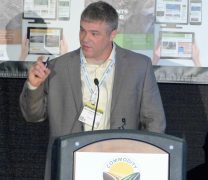 A rally is not a rally unless you take advantage of it. That’s a favorite saying of Matt Bennett, grain marketing consultant for Channel Seed who was part of a grain marketing panel early Thursday to open Farmer Up, the 2017 Commodity Classic in San Antonio. Bennett’s advice about rallies like the market has seen this week is to be aggressive because there just might not be a summer high.

“Two thousand sixteen actually didn’t turn out all that bad, but we’re starting out ’17 in a much better situation,” he said. “It’s just that producers sometimes want to run into the mindset that they think the market is going to react like it did last year with the normal summer high, but the bottom line is the market doesn’t have to do anything. So, what we’ve been trying to tell producers, if they are in a profitable situation going in to ’17, they need to maybe be even more aggressive in defending that situation just in case something happens and everything does not react the way that it did last year.”

Bennett encouraged the crowd to “know their farm.” Unfortunately, not every farmer does. 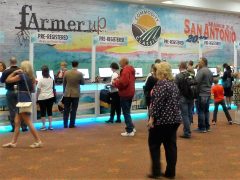 “We’ve asked a lot of producers who want us to help with their marketing, what’s your break-even price for corn or soybeans? They’ll tell me, ‘I don’t know.’ Well you have to know! We’re all running for the most part million dollar or multi-million dollar operations when you look at a gross revenue per year basis, and there are no companies in the U.S. that are million dollar companies that can operate for a whole lot of time without knowing their cost of production.”

To know your cost of production you can use one of the free spreadsheet sources available. Bennett offers a profitability tool at www.Channel.com. Shortly after you click the marketing tab you can know what your break-even price is at your prospective yield.

With this week’s corn and soybean rally the mood at Commodity Classic is even better than it might have been.

“There’s no question, and I said last night when we were getting ready for this, it’s probably going to be even better attendance than what it would have been.”

Bennett was right, it was a packed house. He farms in Illinois and operates Bennett Consulting.