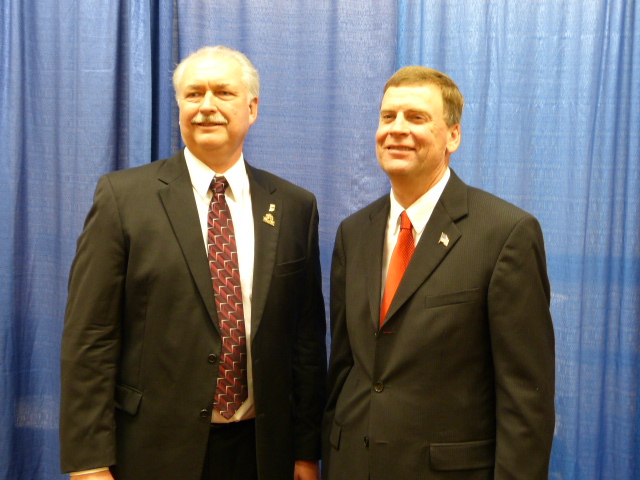 Jasper County farmer Kendell Culp was elected First Vice President on the 4th ballot. Culp ran on a platform of reshaping Farm Bureau membership, “We have to look at membership rather differently.” He said other organizations like national FFA and ASA are changing the way they do membership, “I think it is time for Farm Bureau to sit down and look at other ways we can recruit and encourage others to be part of the organization.”

Several of the candidates for President, like Joe Kelsey and Donny Lawson, were younger farmers who called for changes in the way the organization works. Kron said he will be reaching out to younger farmers and finding ways to get them more engaged in Farm Bureau, “We are going to have to find new ways to get them engaged because maybe the traditional Farm Bureau way is not working.  So I want to reach out to them and see what we can do to help keep them engaged.”

Several of the candidates stressed the need for Farm Bureau to be more diverse and inclusive, with more involvement by the livestock sector and smaller and organic farmers. Culp, who also serves on the  Soybean Alliance board, said he will work to try and bring unity between Farm Bureau and the state commodity groups, “Indiana agriculture needs to speak with one voice.” He stressed to HAT that there needs to be more coordination and consistency on policy issues among all sectors of agriculture.

Both men will assume their duties on January 1. Outgoing President Don Villwock had high praise for the new President, “He has the experience and a deep passion for serving agriculture and Farm Bureau members.” Kron has been served as the IFB vice President for the past 14 years.  Kron farms with his wife and son near Evansville, raising primarily corn, soybeans, and wheat. A 1983 graduate of Purdue University, he holds a bachelor’s degree in agricultural economics. He has held numerous leadership positions, including as INFB’s representative on the U.S. Grains Council and on the Indiana Corn Marketing Council. He is also past president of the county extension board, and he serves as his township’s trustee/assessor.

Culp farms with his wife, parents, son, and daughter near Rensselaer, raising grain and hogs. He served as District 3 director on the Indiana Farm Bureau board for 12 years (the maximum number of years a district director can serve). He currently serves as a director for Farm Credit Mid-America, Jasper County commissioner, and as a member of the board of directors for the Indiana Soybean Alliance.  Isabella Chism will remain 2nd VP of Indiana Farm Bureau.