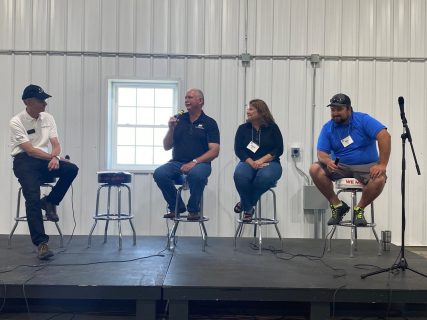 Last week’s Purdue Farm Management Tour stopped in Evansville at the farm of Indiana Farm Bureau President Randy Kron. With Randy being away from the farm frequently on Farm Bureau business, many of the responsibilities fall to his wife, Joyce, and son, Ben. Joyce says they’re a good team.

“It’s myself and Ben full-time and then we have a guy who, we’ve been very fortunate, has been with us for 28 years, and so we’ve worked together for a lot of years. I think we make a really good team and everybody kind of has their thing that they do, and it just seems to have worked out really well for us. It is really nice, when Randy and I have done this all these years and all the time and effort you put into it, it’s nice to see your son come in and take over.”

Ben placed first last year in the National Corn Growers Association National Corn Yield Contest in the irrigated strip-till corn category, achieving 367 bushels per acre. So, naturally, HAT asked him if he would share his recipe for success.

“Yes, it is a proper application of certain nutrients at an exact time,” Kron chuckled.

OK, so he’s not going to give away all his trade secrets. He did say that the contest was a good learning experience and is helping them make decisions on the rest of their corn.

During the Purdue Farm Management Tour, Randy spoke about the importance of getting involved and establishing relationships with government officials.

“It might be at your county level- county commissioners, county council, area plan- but also at your state level and national level. There are people that are going to speak on your behalf and they’re not looking out for your best interest. I can’t stress enough that people need to stand up and have their voice heard, tell their story. So, having a relationship with legislators that they trust you and when it’s an agriculture issue, I’d like them talking to a farmer to get the information, not from somebody else and their perspective.”

Randy has served as President of Indiana Farm Bureau for the past 5 years.