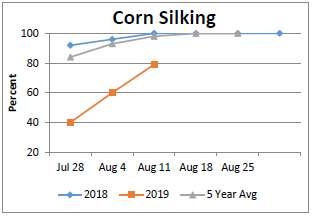 The average temperature for the week was 73.7 degrees Fahrenheit, 1.0 degree above normal for the State. The amount of rainfall varied from none to 1.35 inches over the week. The statewide average precipitation was 0.26 inches. There were 6.6 days suitable for fieldwork for the week ending August 11. 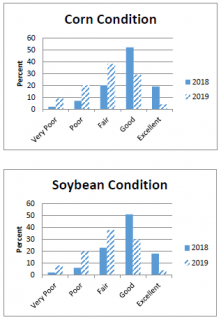 Corn and soybean development was impacted by the dry weather last week, and crop conditions declined slightly. Signs of moisture stress were visible across the State, especially in fields with coarse soils. Irrigation was running where available. Producers took advantage of the dry weather to bale hay, though regrowth in hay fields and pastures had slowed. Other activities for the week included herbicide and fungicide applications, mowing roadsides, harvesting mint, and visiting the State Fair.