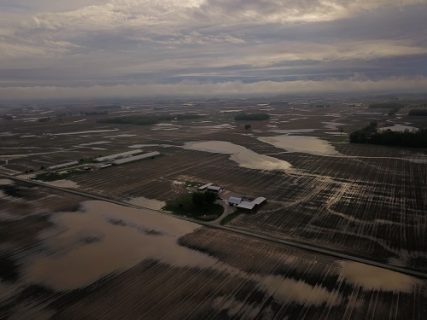 Two weeks ago it was a late season frost, this past weekend it was heavy rains that hit newly planted fields hard.

As a result, replanting will be taking place on some farms. Following the late spring frost, growers were anxious to check the damage done and make the decision if they needed to replant.

Pioneer agronomist Brian Early said, however, in NW Indiana damage assessment has been delayed by cool and cloudy weather, “The damage assessment just really began in the last few days. We did not have enough heat to generate enough growth to tell what plants were dead and what ones would recover.”

Early feels most of the corn and soybeans will recover from the frost but that the 4 inches of rain that fell in some parts of his area over the weekend actually caused more damage than the freeze.

He stated, “There will likely be more replanting to do ponding and flooding than temperature.” He added, while planting progress in his areas has been good very little will take place this week, “Saturday will be the first day we will likely be back in the field.”

As for that replant decision, Early has a few suggestions, “I am not a fan of tearing up a whole stand. Especially in soybeans, if you have a stand count of around 70,000, just go in with a corn planter an plant an additional 60,000.”

Planting in NW Indiana is close to 80% complete, according to Early. Statewide, corn planting is at  72% with soybean planting at  56%.  Corn emergence stands at 31% with soybeans at 18%.  Nationally, 80% of the corn has been planted as well as  53% of the soybeans.