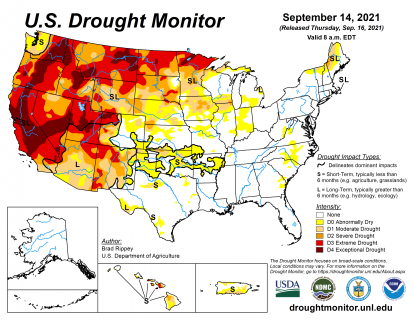 Meanwhile, long-term drought issues persist across the upper Midwest, despite some recent rainfall. The Department of Agriculture also reported that topsoil moisture was at least one-third very short to short in each Midwestern state except Wisconsin.

Short-term dryness and drought has become more apparent in recent weeks across the southern section of the High Plains, including parts of Kansas and Colorado. Above-normal temperatures largely offset any benefit from patchy rainfall across northern California and the interior Northwest.

USDA also reported that at least one-half of the acreage devoted to rangeland and pastures was rated in very poor to poor condition in eight of the 11 Western States.