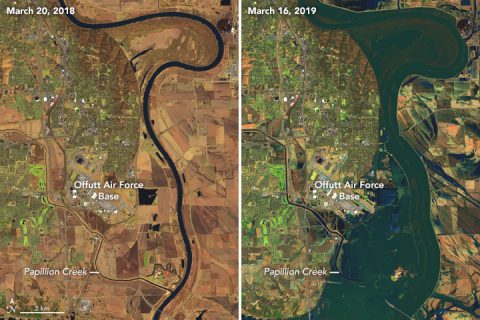 Flooding in Nebraska is so bad that Nebraska Farm Bureau has established a disaster relief fund for the state’s farmers and rural communities that are suffering losses. The majority of flooding is in that state, but it is also extending to southwestern Iowa, northeast Kansas, and northwest Missouri. The easiest visual evidence of flood impact is water over the river banks which halts navigation.

However, the Missouri River is not used to transport a lot of products, so the impact on transportation goes beyond the river, according to HAT Chief Meteorologist Ryan Martin.

“We’re seeing this mostly affect rail logistics right now across those areas,” he said. “A lot of railroads are being washed out, we’re seeing a lot of railroad trestles damaged, and so we’ve got all sorts of concerns there. How quickly can we get back in to rebuild and then how long will it take to rebuild? And this is not even talking about logistics with regards to trucks. Keep in mind the same kind of problems that we have on railroads we’re going to have on real roads as well with bridges being washed out. So, logistics in terms of moving grain on rail and by truck will be impacted for a good while longer.”

Indeed, even interstates have already been shut down. As with any flooding, the problems will just continue downstream.

“From here the flood waters work their way down the Missouri River valley and tie into the Mississippi, so look for this to be something that really causes issues right there around southern Illinois, the Cairo area. You’ve got the confluence of the Ohio, the Missouri, and the Mississippi all coming within a very small span. So, these waters are going to work their way down the Mississippi, and this is where you’re going to see impacts on barge freight. High river levels mean you’re going to see barge restrictions and we’ve had those already because of high waters.”

Those high waters were the result of heavy rains from Ohio and Indiana earlier in the season. Martin says if another big batch of rain comes over the confluence, the southern Illinois, boot hill of Missouri and western Kentucky, problems will compound. And Martin says there is a good chance of that kind of rain event there from the end of March through the first few days of April.