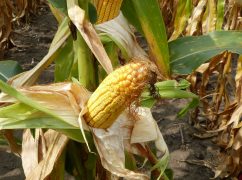 From planting all the way to mid-summer, one little slice of Indiana was reaping the benefits of everything going right for its corn and soybean farmers. This week the situation has changed dramatically in the Kouts area in Porter County.

“We’ve been dry now for about seven weeks,” said Aaron Freyenberger, seedsman with Seed Consultants. “I think maybe we have a total of about an inch and a tenth since then, so we’ve really been suffering with the heat and the dryness, and it’s really starting to show here in the last couple of weeks.”

He spoke with HAT at a field day just south of Kouts and about 25 miles from Lake Michigan. Planting got off to a great start and timely rains followed up until the shutoff the first of August. Now those onetime great crops have some issues. 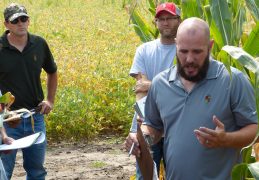 “I’ve noticed there’s a lot of disease coming in and also with the quality of the kernel, and it looks like test weight is going to be an issue here. There’s a lot of cannibalization going on with the crop and as far as beans go, they aren’t as bad. Really we need an inch a week in August to really fill out those pods and give us a good test weight on those beans.”

He said harvest will start by the end of the month for many. That’s a couple of weeks ahead of usual and soybeans will come off first.

Seedsman Brandon Beck (left, Freyenberger right) said some soybeans in his territory have already been harvested. 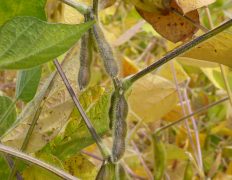 “Corn is not too far behind,” he told HAT. “At this point corn is not far from black layer towards the Lafayette area, and towards Crawfordsville and Kingman we’re seeing some corn that’s about a week away. In the Veedersburg area some early group two beans are yielding up and down, depending on the situation and where they’re at anywhere from the 30 bushel range up to 70 bushel.”

Beck says yields will probably continue to vary once harvest numbers start to roll in. Hear more from both Beck and Freyenberger:Brandon-Beck-Aaron-Freyenberger-SCI