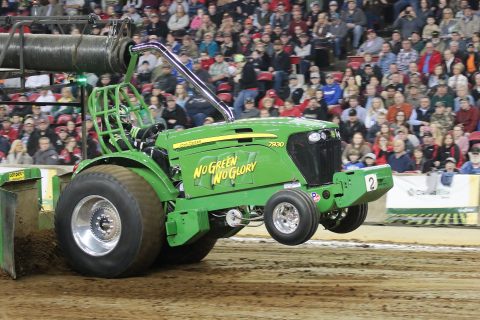 While thousands of people come to see the National Farm Machinery Show in Louisville, many are also there to see some other big tractors at the annual tractor pull held in the arena. This event has some strong ties to Daviess County, Indiana. Miles Krieger from Washington Indiana is one of the announcers at the tractor pull here in Louisville. He told HAT the small town of Washington is a big name in tractor pulling.

“You go back into the 1970s and 80s and there were some fantastic pullers from Washington, Indiana. Today, Steve and Greg Boyd are champions in the sport. Greg just won the Lucas Oil Pro Pulling Championship in the modified class, and his father Steve had been a 7 time Pro Pulling class champion.”

Krieger is a young man with a passion for pulling, something he got from his dad Butch, from Clarksville, IN, who is famous in his own right in pulling circles.

”This will be his 40th year behind the microphone here at the Louisville show.” Miles said he spent his summers as a youth on the road with his dad traveling the circuit pulls.

Each tractor pull announcer has his own style. For Krieger it is focusing on the people, not just the machines, “I try and get to know the people: what they do for a living, their kids, and family. Then I try and help the crowd understand who they are.”

The Louisville championship is Saturday night. Krieger says it is the Super Bowl of tractor pulling, “It is an invitation event, so you have to already achieved something before you even get here. So to make it to the finals is really special.”