Lugar: President Needs to Surround Himself with Better Negotiators 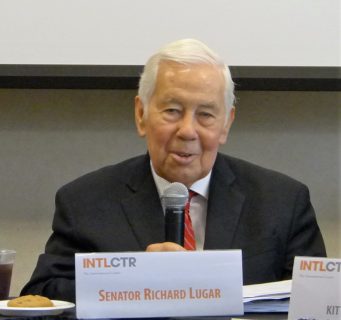 Richard Lugar was a six-term Republican Senator from Indiana. He also twice served as the Chairman of the Senate Ag Committee. He was a panelist at an event in downtown Indianapolis on Thursday put on by the organization Farmers for Free Trade. Lugar was outspoken and critical of the leader of his party.

“I don’t believe the president has overall strategies with regard to trade. I think that he has reacted to what he feels are challenges by other countries, and I’m hopeful that he will move on to a time in which he does surround himself with more people who have this background and maybe with people who are better negotiators.”

Trump and his administration have told farmers that NAFTA renegotiation was the first domino needed to move other trade deals forward, including a bilateral agreement with Japan, a new deal with the European Union, and then with China. I asked Lugar if he was any more confident that the president’s trade approach with China might work after the United States-Mexico-Canada trade announcement. He said simply, “No. I’m not any more confident. I have not seen any movement.”

He also believes that passage of the USMCA in Congress is not a foregone conclusion.

“At this point it appears to be an improvement. But I think we’re going to be analyzing what other factors beyond those that have been publicized are a part of this because that would be the gist of congressional debate. There will be some members who feel that their interests have been overlooked.”

Lugar is a co-chair of Farmers for Free Trade along with retired six-term Democrat Max Baucus from Montana.