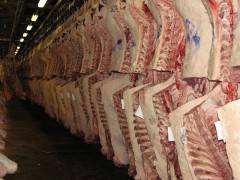 The National Pork Producers Council today committed to work with the Trump administration to preserve tariff-free market access for U.S. pork exports to Canada and Mexico. The administration is planning to pursue trade discussions with the two countries.

“As far a pork is concerned, the trade deals with Canada and Mexico have been tremendous for U.S. pork producers,” said NPPC President John Weber, a pork producer from Dysart, Iowa. “Our exports to those nations exploded because of the trade pact we have with them. But we know that some concerns have been raised by others, so we are committed to working with the Trump administration in looking for ways to improve our trade relationships with Canada and Mexico.”

Through November, U.S. pork exports to Mexico in 2016 were nearly $1.2 billion, up 21 percent from the same time last year, and to Canada they totaled $731 million, making those countries the No. 2 and No. 4 export markets, respectively, for U.S. pork.

Since the U.S.-Canada-Mexico free trade agreement went into effect Jan. 1, 1994, U.S. trade north and south of the borders has more than tripled, growing more rapidly than U.S. trade with the rest of the world. Canada and Mexico are the two largest destinations for U.S. goods and services, accounting for more than one-third of total U.S. exports, adding $80 billion to the U.S. economy and supporting more than 3 million American jobs, according to data from the Office of the U.S. Trade Representative. In fact, U.S. manufacturing exports to Canada and Mexico have increased nearly 260 percent over the past 23 years, and U.S. farm exports to the countries have grown by more than 150 percent.

“Trade in pork with Canada and Mexico has been so successful that any disruption in exports with either partner could hurt our producers’ ability to compete,” Weber said. “We need to make sure we maintain and even improve our pork exports to our neighbors while working to ensure that others benefit as much as we do.”