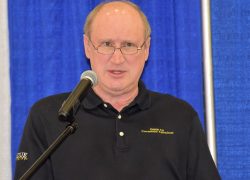 During the Purdue presentation this week on keeping the bottom line black in 2022, the cost of producing corn and soybean crops was of course a focal point. And the focus was on just how high costs are rising, but also how to manage the price explosion.

“It’s definitely higher and the largest cost increase is obviously for fertilizer,” said Dr. Michael Langemeier, Purdue Extension ag economist. He joined Dr. Jim Mintert and Dr. Nathan Thompson on the stage at the Indiana Farm Equipment and Technology Expo. “But you’re also seeing increases in herbicide costs, seed costs, fuel cost, repairs, it’s on and on down the line. Most costs other than interest look like they’re going to be increasing.”

On breakeven prices for corn, Langemeier said Purdue’s latest estimates have the “breakeven price up over 20 percent, approaching 25 percent depending on the productivity of the land. Soybeans is not quite as bad because soybeans doesn’t have nitrogen and nitrogen is very important in driving those higher corn prices. Soybeans is closer to 10-12 percent increases, but obviously those are very high increases historically.”

He added fertilizer cost as a percent of total production cost has risen to 27 percent, a number that is normally under 20 percent.

Even with the higher cost he encourages farmers not to write off planting a corn crop. Rather, create a budget for both corn and soybeans and you might be pleasantly surprised that corn is very competitive in quite a few situations.

As for fertilizer rates, “don’t just put on the same amount of fertilizer you put on in the last five years or so. When prices are higher you need to try to reduce those rates a little bit if you can.”

and watch the seminar playback on the HAT YouTube channel.